The trade dollar value ranges from $1 to $100,000 depending on the quality of the coin, which year it was minted in, which mint it was manufactured at, and its strike type. 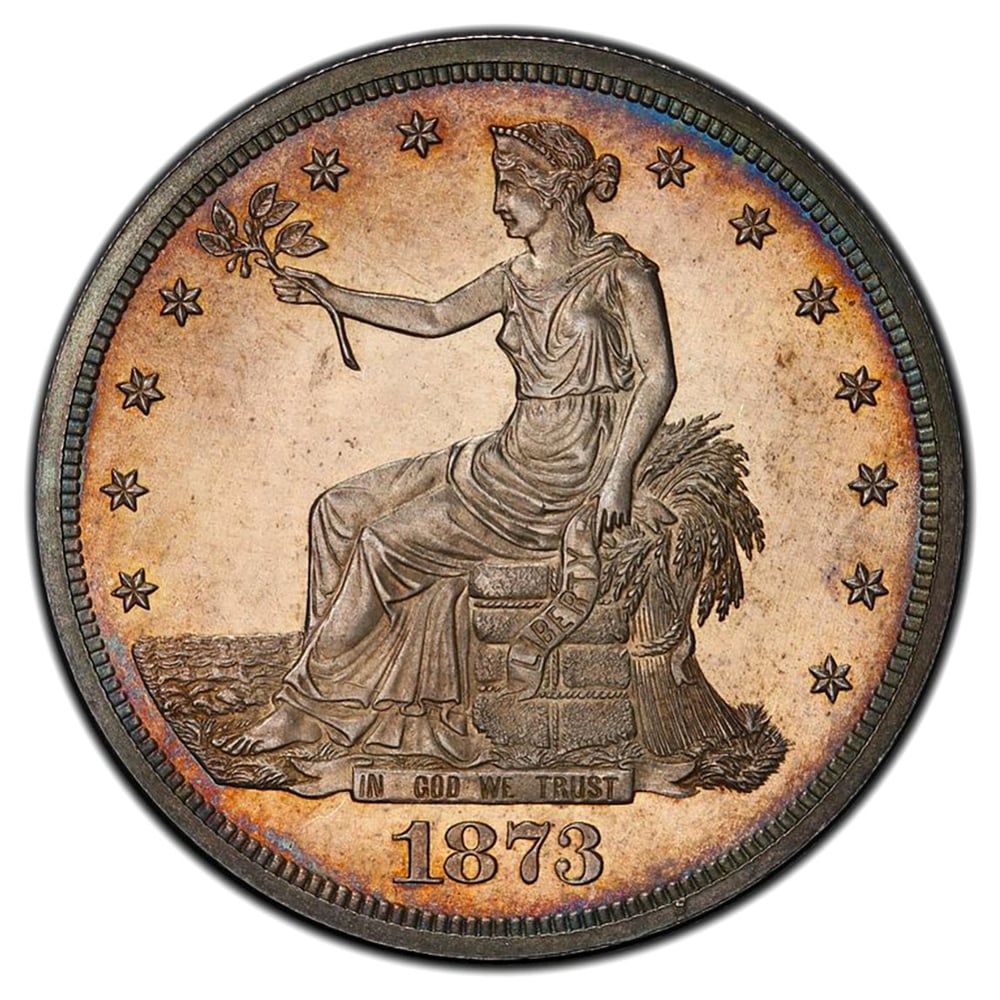 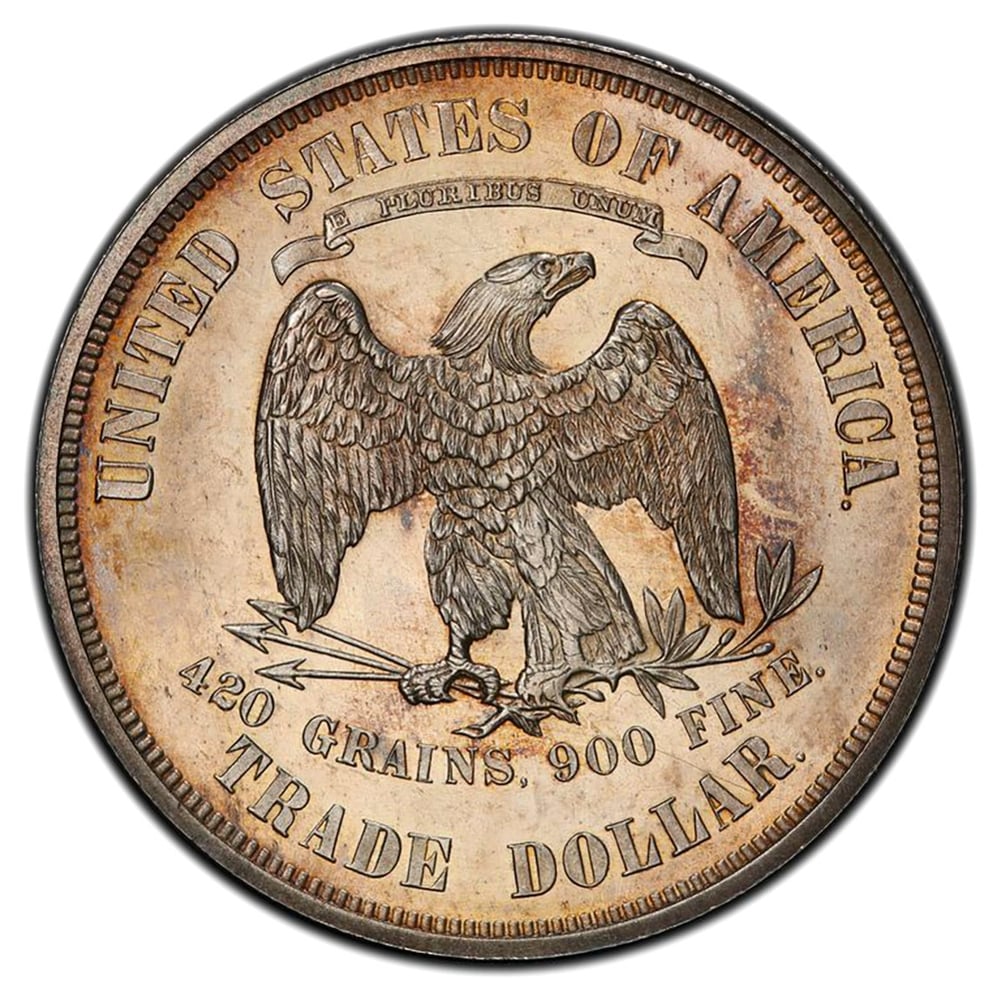 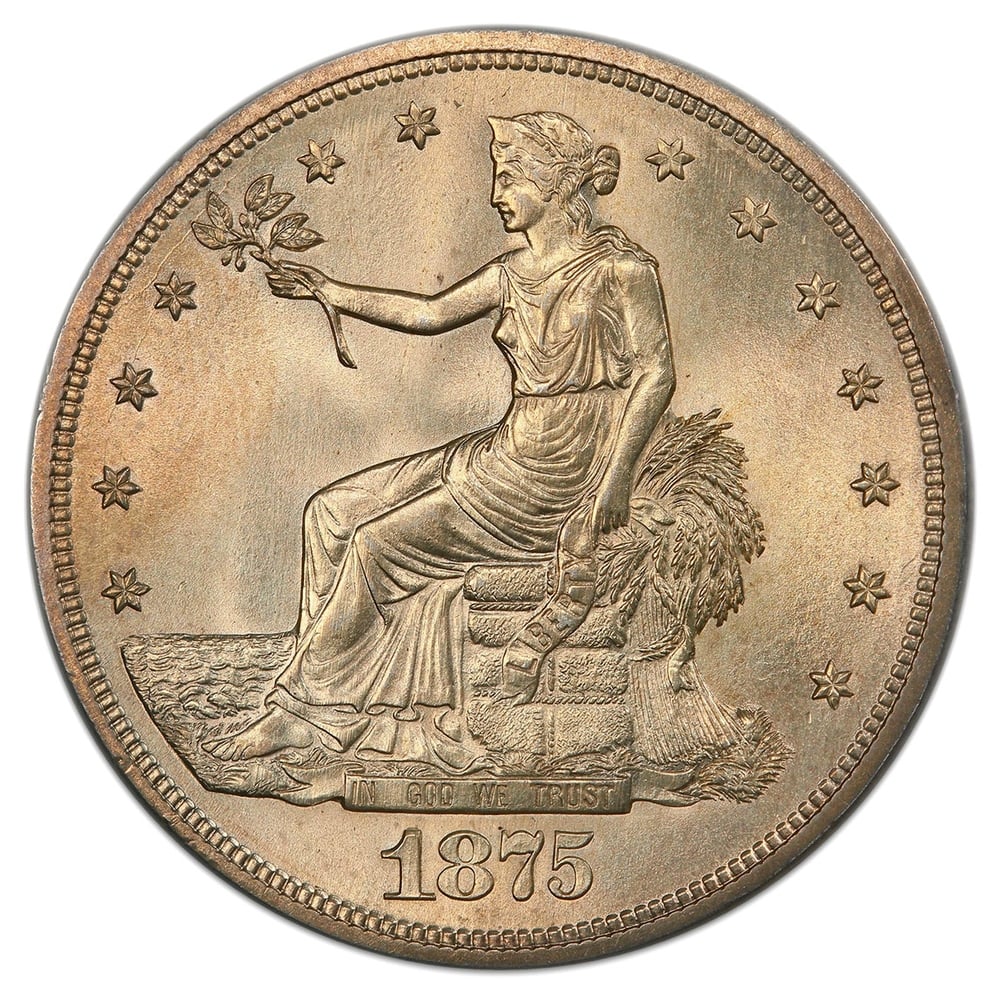 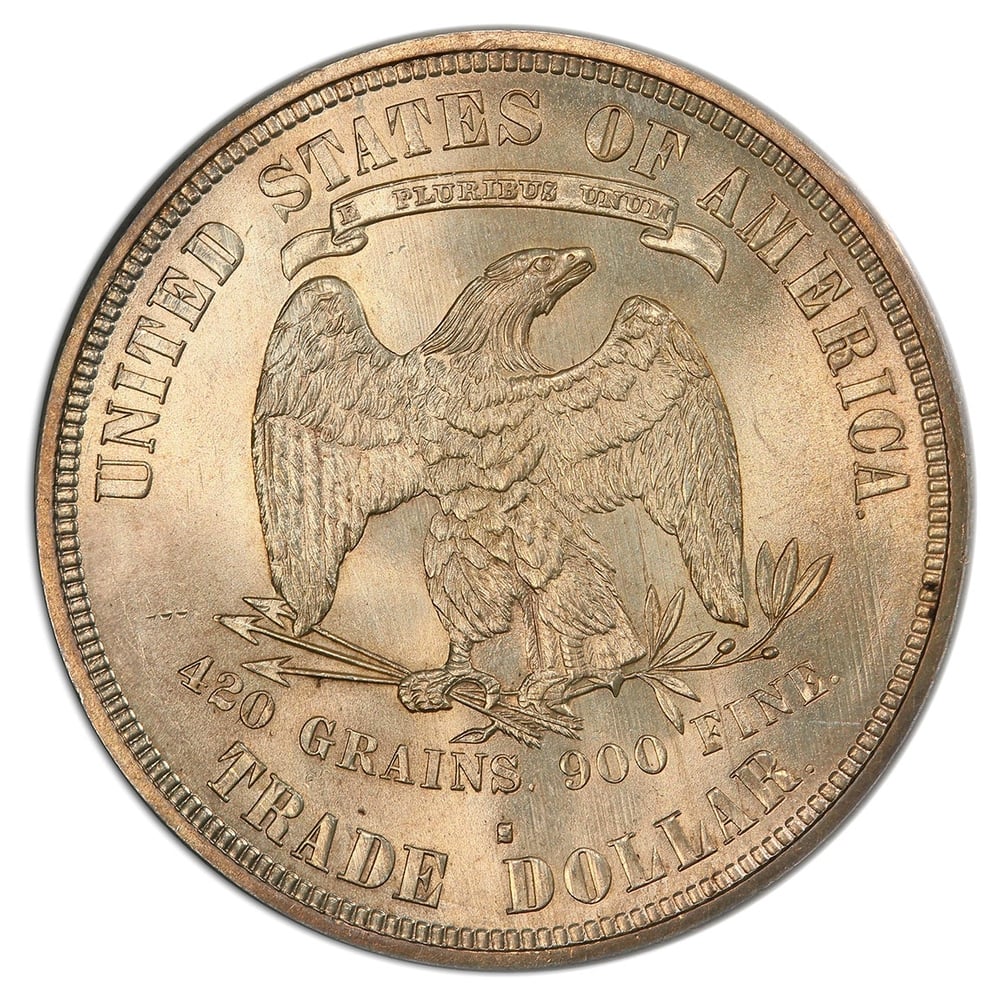 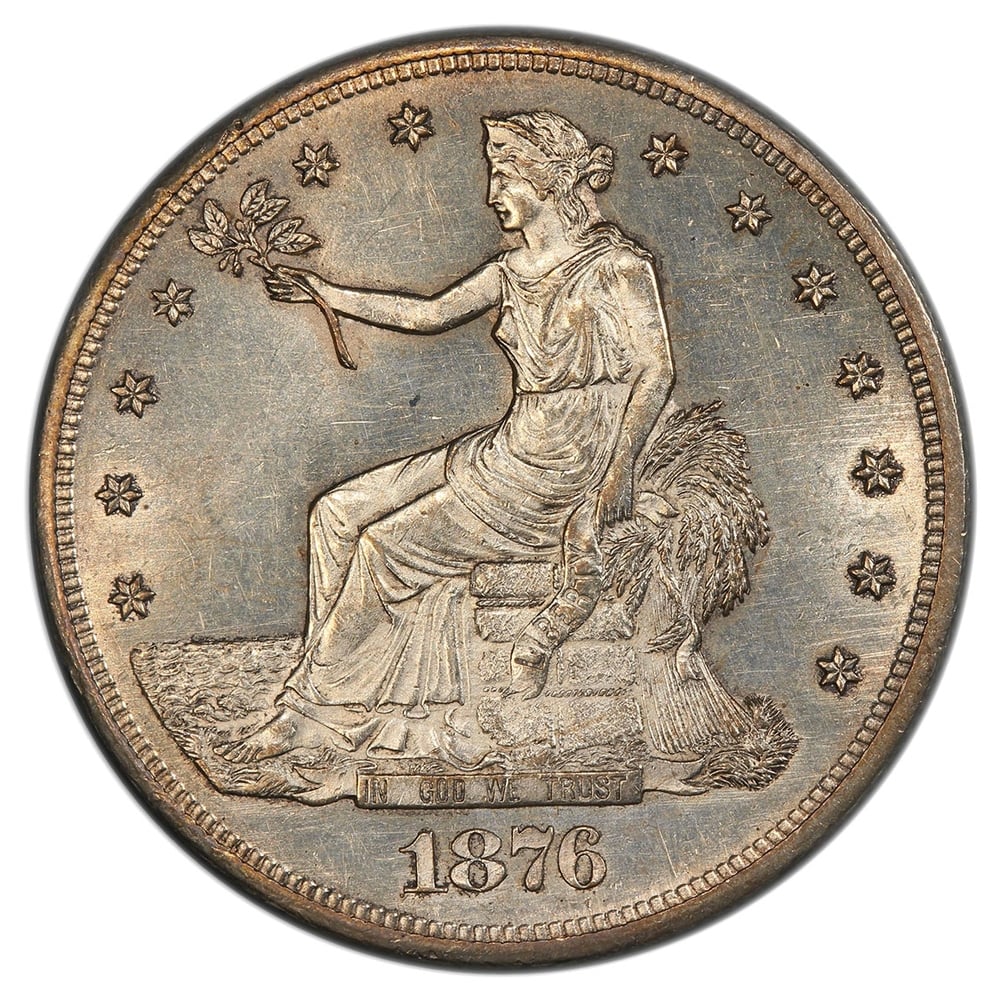 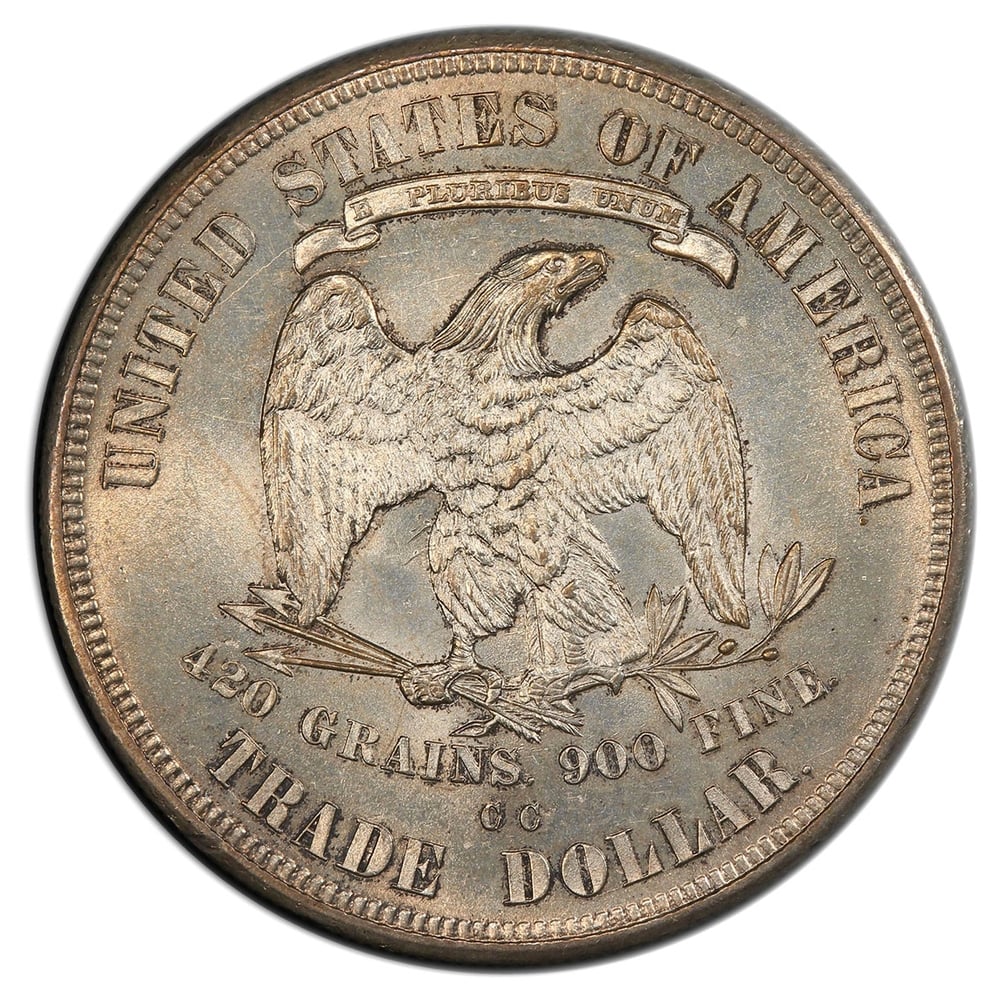 The U.S. Trade Dollar was created in response to other western world powers circulating crown sized silver coins in Asia. Weighing in at 420 grains, and used exclusively in trade with Asian nations, such as China, Korea, and Japan, the US Trade Dollar is slightly higher in weight than other US silver dollars of the time such as the Morgan Dollar or Seated Liberty Silver Dollar.

The US Trade Dollar design portrayed Lady Liberty resting on a cotton bale by the seashore. To her back stands a shock of grain. In her right hand she extends an olive branch, a friendly gesture meant for those on the other side of the Pacific. The reverse shows an eagle with arrows and an olive branch in its talons. Below the eagle are the inscriptions "GRAINS .900 FINE" and "TRADE DOLLAR". The US Trade Dollar was minted from 1873-1885 and was designed by William Barber and was loosely based on Christian Gobrecht’s designs of contemporary silver coins in circulation at the time.

Production took place in Philadelphia, Carson City and San Francisco. During the coin's 13-year lifespan the coin struck less than 36 million pieces which includes about 11,000 proofs. All high-grade business strikes of the trade dollar are rare to non-existent, leaving proof state coins to fill most of the demand from type collectors. The more rare business strike would be the 1878-CC with a mintage of 97,000 many of which most likely have been melted. The remarkable beauty of originally-toned proofs excites countless collectors to attempt complete proof runs (usually not including the virtually unavailable 1884 and 1885). Indeed, any trade dollar is extremely valued and sought-after in excellent condition.

During the last 2 years of the US Trade Dollar the 1884 and 1885 coins were produced in secrecy, and were unknown to the collecting public until 1908. They might have had a quiet start, but they are regarded among the most valuable of all United States Coins today.