The seated liberty half dime value ranges from $1 to $100,000 depending on the quality of the coin, which year it was minted in, which mint it was manufactured at, and its strike type. 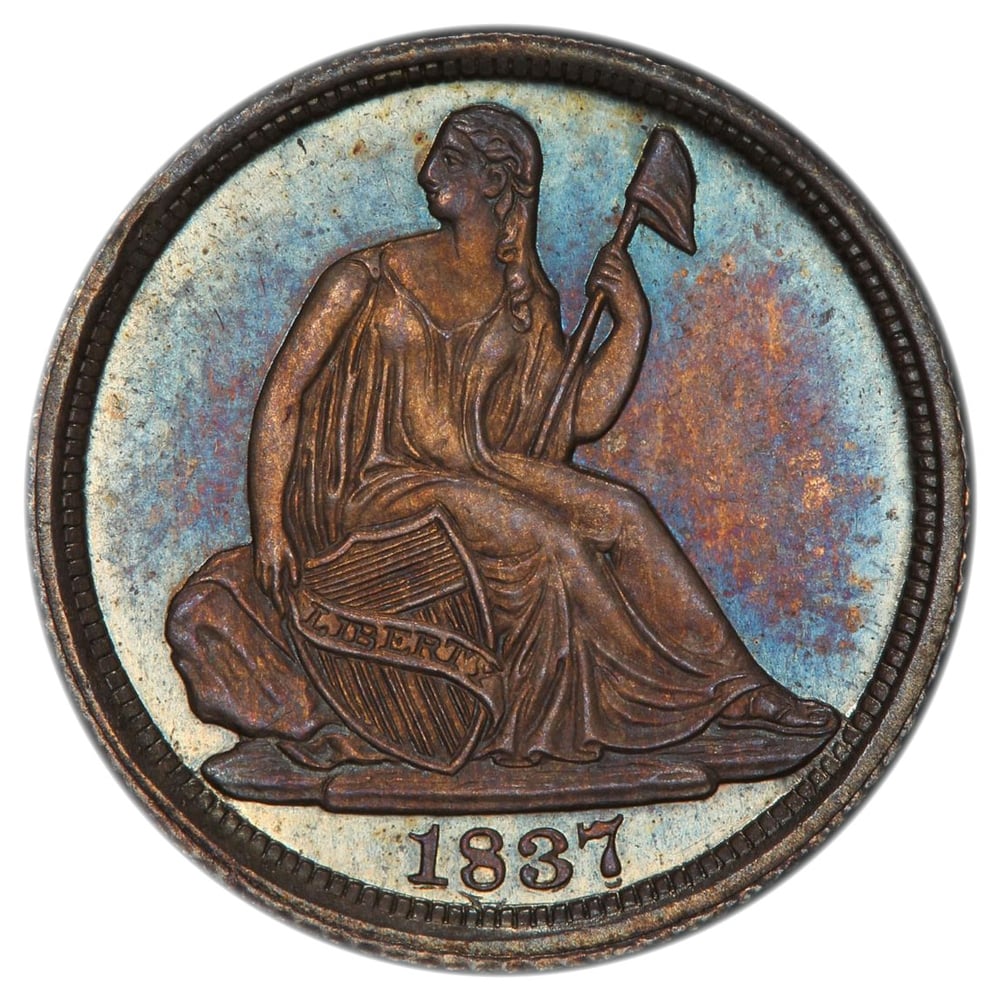 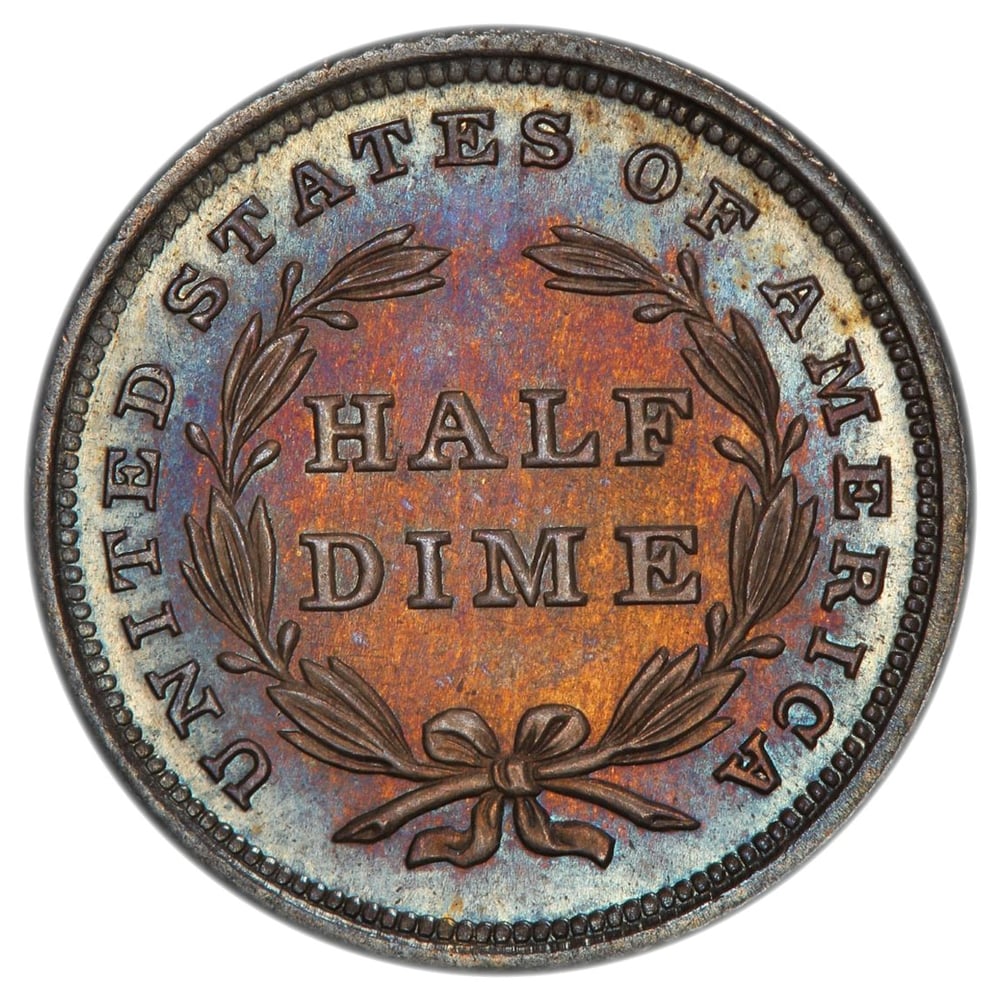 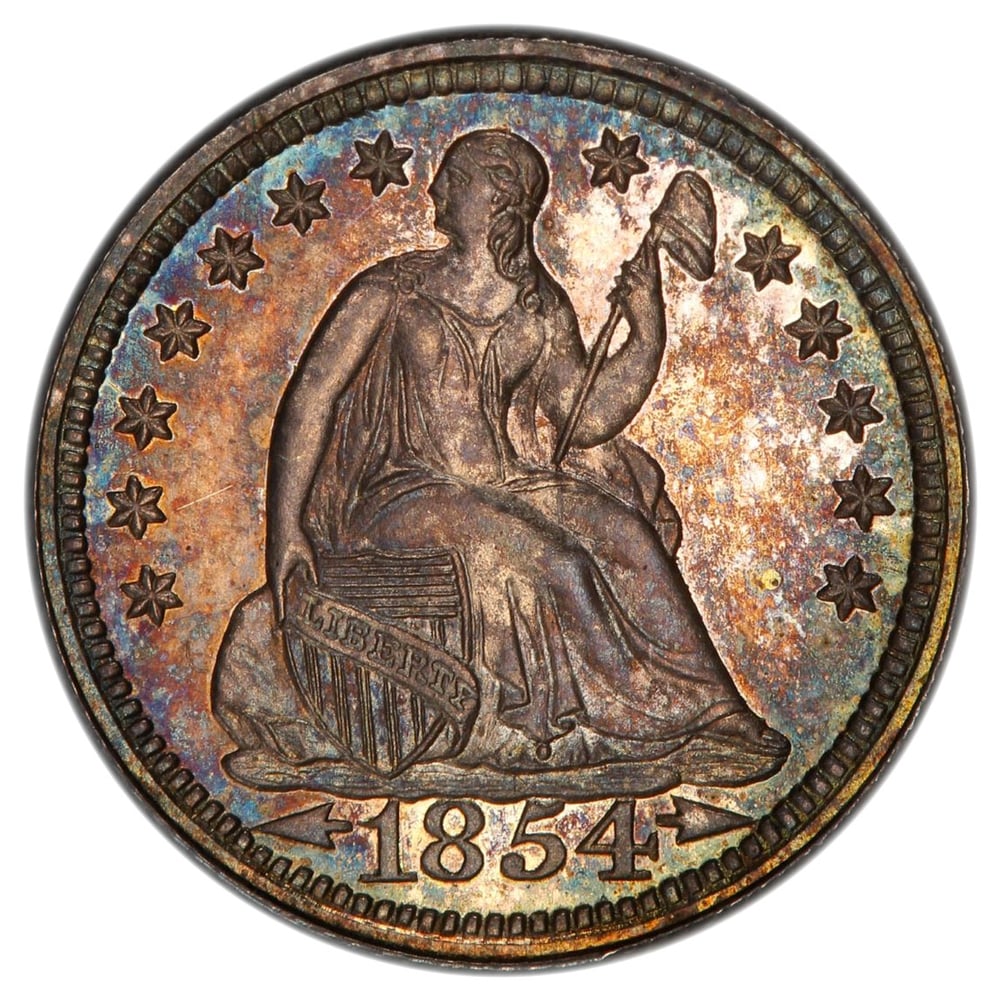 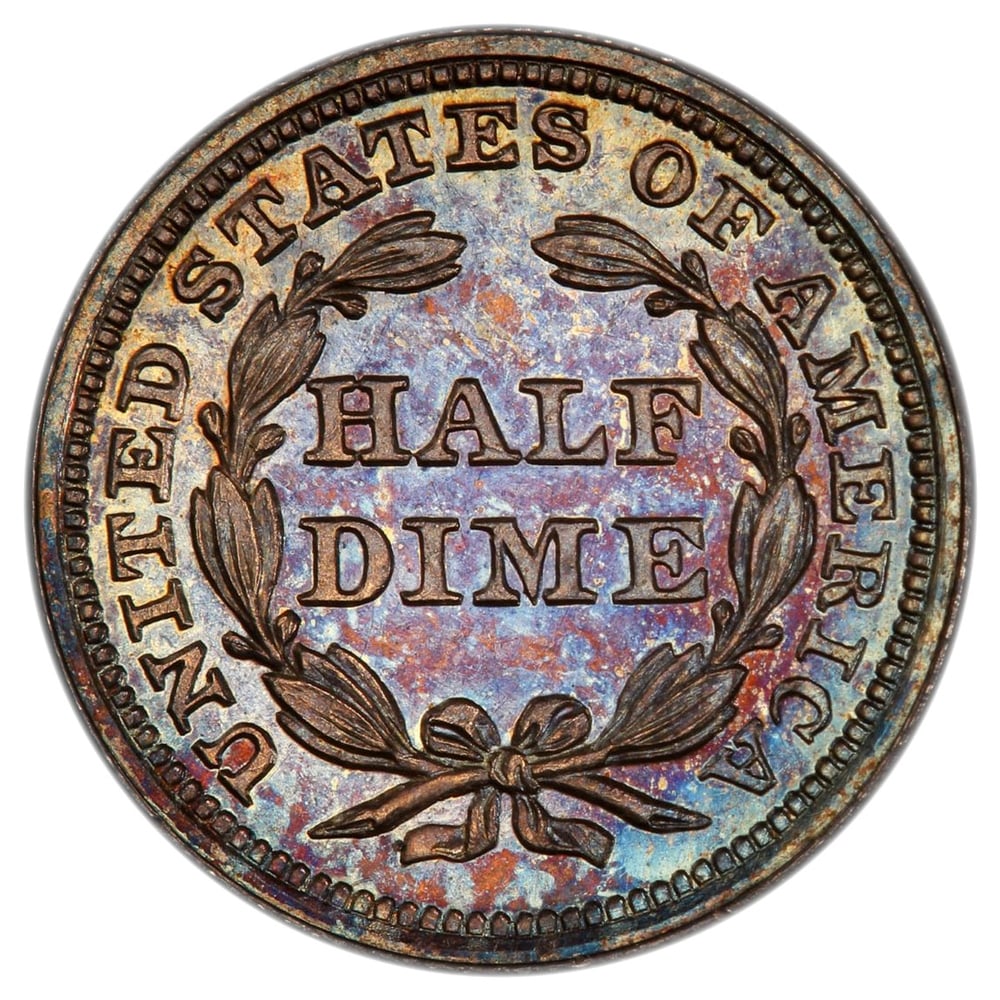 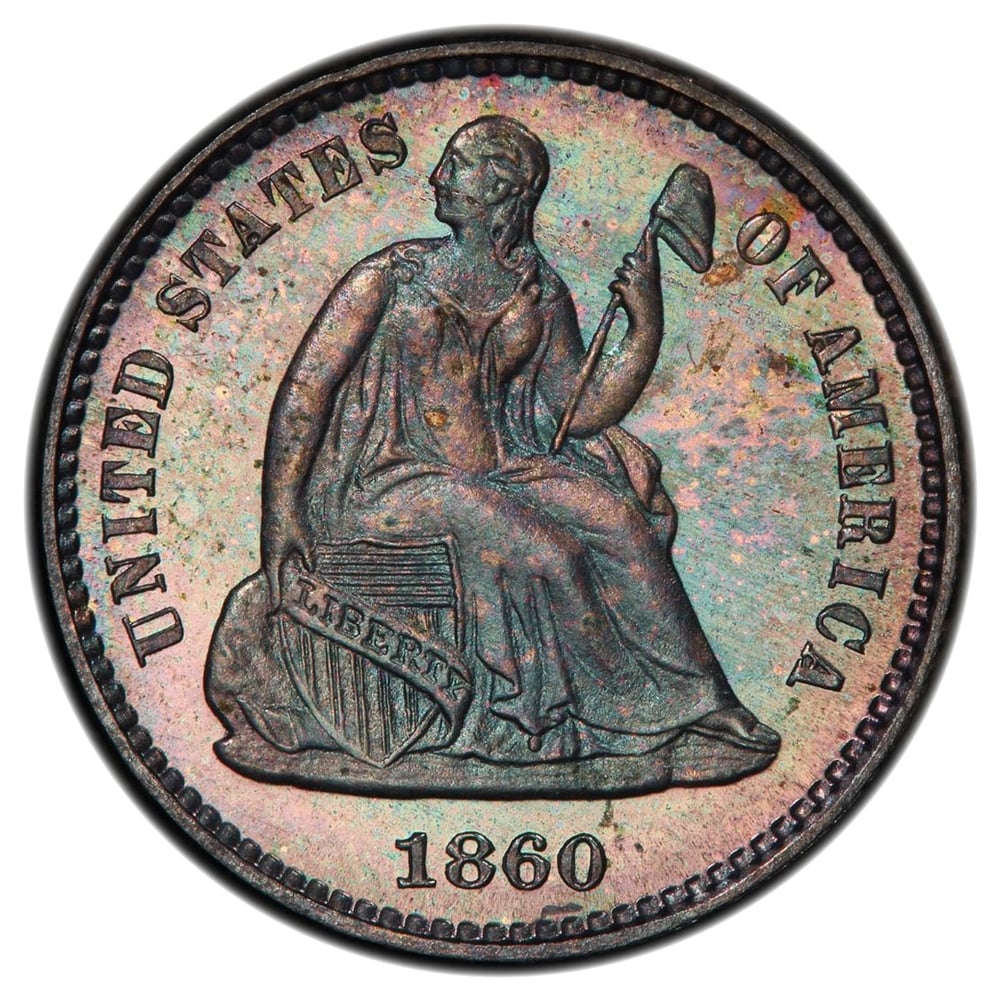 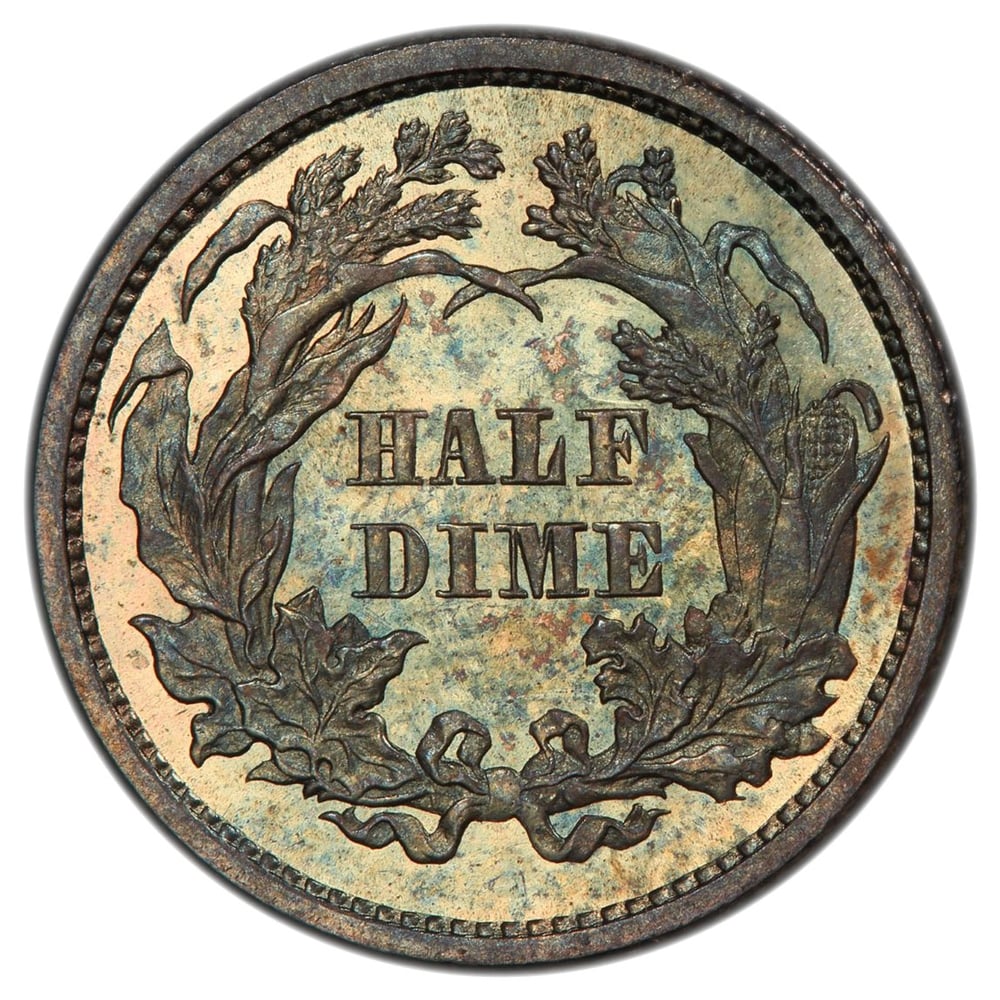 The Liberty Seated Half Dime was produced from 1837 to 1873. This coin has numerous variations as there were many modifications to the design over its course of production. This would be the last silver half dime produced by the United States mint, however the long run for this coin can be attributed to a large influx of post revolutionary Mexican silver to the US. This combined with steam powered coin presses saw a boom in the US Mint’s production.

The Seated Liberty series of coins were Christian Gobrecht’s most famous design, with Lady Liberty modeled after England’s Britannia. This design was first seen on the Gobrecht Silver Dollar in 1836, with the silver half dime to quickly follow in the next year.

The No Stars Type 1 features the matching obverse to the Gobrecht Silver Dollar with Lady Liberty seated on a rock above the date, her left hand holds a staff topped with a Phrygian cap, while her right hand holds a shield with Liberty inscribed on it. The reverse features the denomination HALF DIME encircled by an open laurel wreath tied with a ribbon at the bottom and the text UNITED STATES OF AMERICA encircling the coin. The 1837 Philadelphia issue saw 1,405,000 of these coins minted, while New Orleans produced about 70,000 Type 1 Liberty Seated Half dimes in 1838.

1838 saw the addition of 13 stars to the obverse of this half dime. The stars remain on the obverse of this coin until 1860 with Type 5 of this coin. In 1838 each star was hand punched into a Type 1 minted coin. 1840 saw the advent of Type 3 with extra drapery beneath Liberty’s left arm. The Type 4 modifications were created 13 years later to combat mass hoarding of silver due to the incredible influx of gold with the California gold rush. The arrows on either side of the date reduced the weight of each coin from 20.625 gains to 19.200 gains. Type 5 retained the reduced weight but saw the removal of the stars and instead saw the text UNITED STATES OF AMERICA in their place on the obverse. The reverse saw a widened cereal wreath instead of a thinner laurel wreath.

When the mint was transitioning from the Type 3 coin to the Type 5 the United States was on the brink of Civil War. This time saw a lot of hoarding of all coins, especially precious metals like the Seated Liberty Half Dime. Despite the widespread hoarding of silver the half dime survived the war only to be the last silver half dime produced, and was replaced by the five cent nickel in 1866.