The standing liberty quarter value ranges from $1 to $100,000 depending on the quality of the coin, which year it was minted in, which mint it was manufactured at, and its strike type. 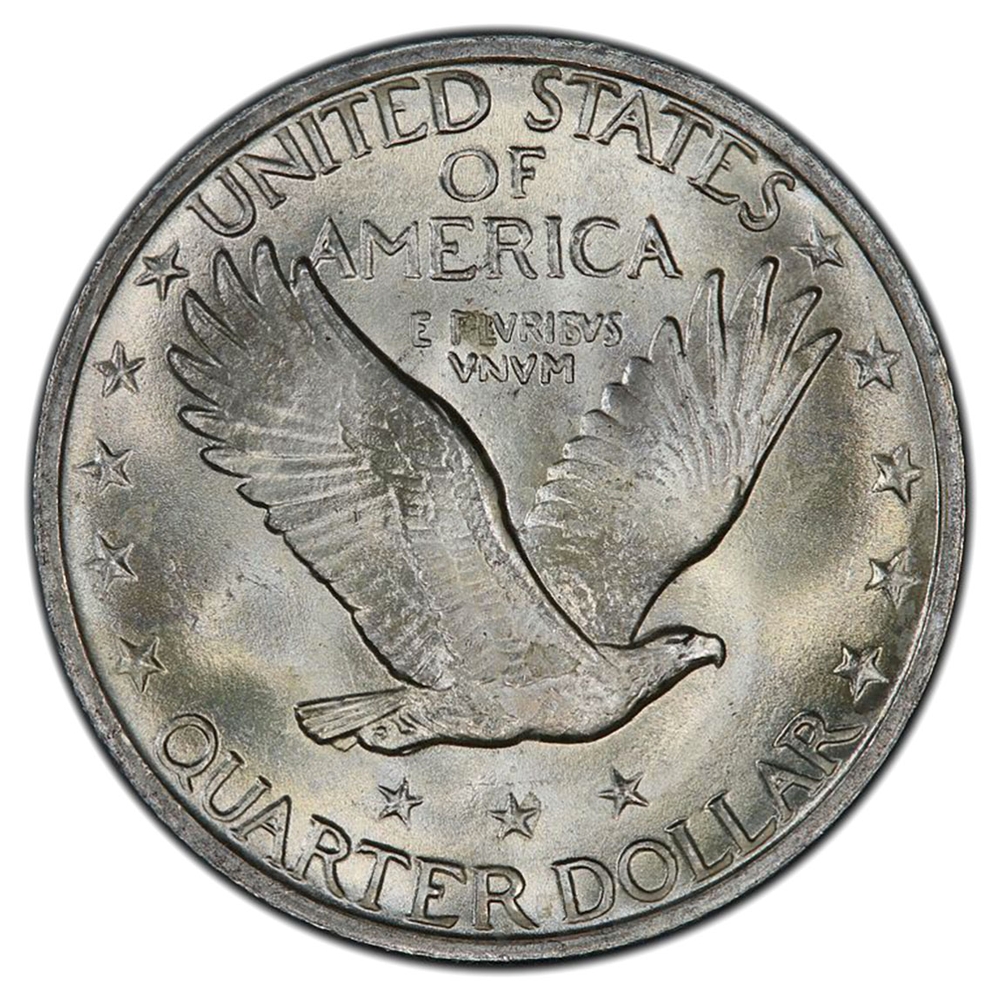 The appearance of the 1916 Standing Liberty Quarter was the first time in the history of our coinage there were separate designs for each of the three denominations. The designs for the dime, quarter, and half dollar, were welcomed for their beauty and quality have been highly praised by collectors and numismatists.

Hermon A. MacNeil was a well-known sculptor who was known for his works dealing with American history, particularly on public buildings and monuments. He was chosen to produce the new design for the quarter dollar, which would replace the familiar Barber motif that had been employed since 1892. MacNeil's design would be produced from 1916 through 1930, continuously except for the year 1922.

On the obverse, Liberty is shown as a full-length front view figure with her head turned toward the left. She appears to be stepping forward as if to enter the gateway of the country. On the wall are inscribed the words 'In God We Trust'. The left arm is upraised holding a shield and in the right hand she holds the olive branch of peace. Above the head in an arch is inscribed the word 'Liberty'. The date is shown on the step under her feet.

The reverse of the coin shows an American eagle in full flight with wings extended as if it is sweeping across the coin. The inscription 'United States of America' and 'E Pluribus Unum' is shown above with 'Quarter Dollar' below. Connecting the lettering are thirteen stars, seven to the left and six to the right, which help to form a circle with the lettering.

Legend has it that complaints arose concerning the partial nudity of Miss Liberty. It is rumored that Miss Liberty's exposed right breast was offensive to some and due to this the design was changed part way through 1917. Others believe that the motif was revised to show Miss Liberty nearly completely encased in a suit of armor or mail, probably in reference to preparedness for the World War then raging in Europe. In 1925, the date was recessed on the step to minimize wear, resulting in a minor type change for issues of 1925-1930.

The reverse was also restyled in 1917. In the new design the eagle is higher and more centered on the coin, with three stars below the eagle and five to each side. This redesign is referred to as the Type II quarter.

There is much controversy regarding the model for MacNeil's design. Some believe that Miss Dora Doscher, who later became Mrs. H. William Baum, was the model. Miss Doscher is said to have appeared in films under the name of Doris Doree. Decades later, allegations were made that Irene MacDowell, a Broadway actress, was actually the one who posed as the model. Since MacNeil and Doscher were no longer living, and could neither verify nor deny Irene MacDowell's comments, it is unclear who the actual model was.