The lincoln wheat penny value ranges from $1 to $100,000 depending on the quality of the coin, which year it was minted in, which mint it was manufactured at, and its strike type. 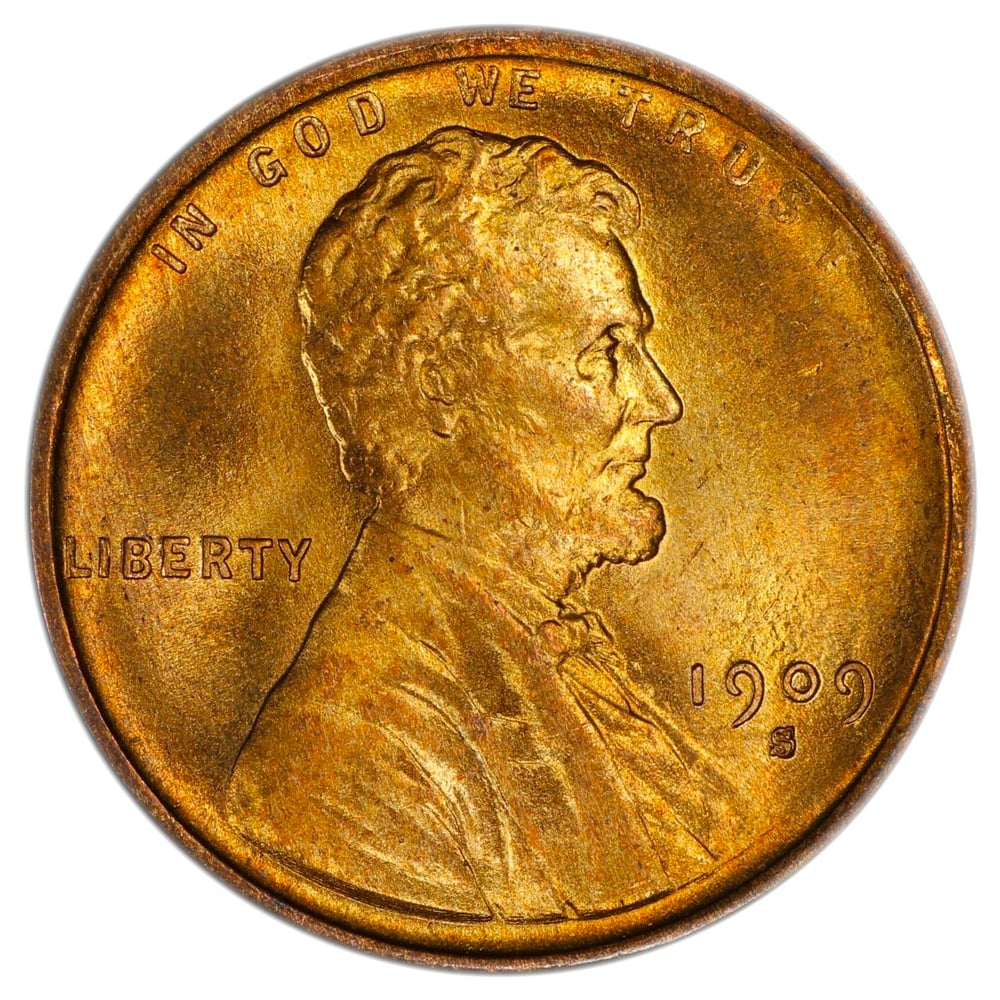 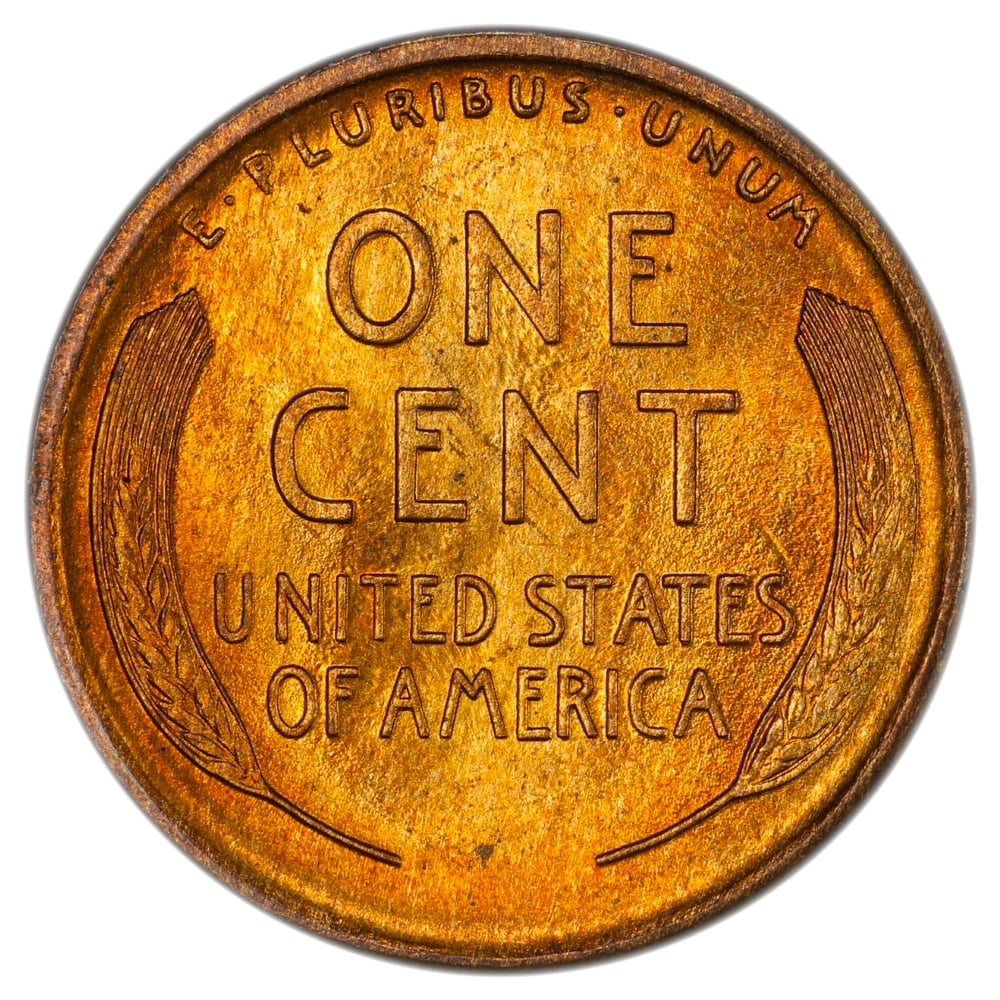 In 1909, to commemorate the 100th anniversary of Abraham Lincoln's birthday, President Roosevelt commissioned New York sculptor Victor David Brenner to redesign the penny to honor Lincoln. The new wheat penny design replaced the old Indian Head design and featured a picture of Lincoln on the front (also called the obverse side) of the penny, and 2 stalks of wheat and the words, "ONE CENT", on the back (also called the reverse side) of the penny. This design stood until 1959 when the stalks of wheat were replaced by a rendering of the Lincoln Memorial to commemorate the 150th anniversary of Lincoln's birthday.

Unlike the pennies of today, which are made from copper plated zinc, wheat pennies were made of nearly solid copper (95% copper and 5% zinc/tin). The exception to this are the 1943 silver colored pennies, which are made of steel, as the copper that was normally used to make pennies was needed for the Allied war effort that year. Also, in 1944 and 1945, the wheat pennies were made of a "shell casing" bronze, made up of 95% copper and 5% zinc.

In 1909, Victor D. Brenner, a New York sculptor, was asked to redesign the wheat penny to commemorate the 100th birthday of Abraham Lincoln. Brenner featured a profile of Lincoln on his design and was the first US coin to have a president's image on its face. Brenner's newly designed penny was minted from 1909 to 1958.

Brenner, as the designer of the new penny, was allowed to put his initials, "VDB", on the reverse side of the penny, on the bottom, between the ears of wheat. This wasn't a popular decision with the public and they demanded his initials be removed. They claimed that Brenner had already been paid for the design and additional recognition was not needed. Brenner's initials were added back to the coin in 1918, but this time on the face (obverse) of the coin, below Lincoln's shoulder.

The VDB penny was only minted for 2 days in 1909. After that, Victor D. Brenner's initials were removed. In 1909, pennies were only minted in two locations - Philadelphia and San Francisco, so there are 4 varieties of the 1909 penny:

The 1909-S VDB wheat penny, with a mintage of 484,000 is the rarest, and most valuable of the 4 varieties. It is a key date wheat penny, meaning it is highly sought after and collectible and is more valuable than the average coin due to its scarcity and collectibility. This is a coin that would be a highlight of any wheat penny collection.

Meanwhile the non VDB 1909-S Wheat Penny are still sought after and highly valued as there was only 1,825,000 of these pennies minted in San Fransisco and this coin marks the last year the Indian pennies.

The 1909-P VDB coin had a mintage of 27,702,000 making it much less rare than its San Francisco counterpart however still valuable especially at high grades or if you have a proof version of this coin.

There are several other key date wheat pennies that have a very high value and are generally sought after.

Other visual cues you have a fake are by looking at the numbers. The "4" on a 1944-D penny is short and fat, while the "4" on an authentic 1914-D penny will be tall and lean. There also appears to be large gap between the "9" and the first "4" on a fake 1914-D. This is because part of the "4" was removed, leaving an unnatural looking space between them.

If you think you have a 1914-D key date wheat penny, take it to an expert to be examined and certified as authentic.

Normally a US coin with no mint mark means that it was made in Philadelphia at the central mint. All pennies made in 1922 were made in Denver, though, and most of them have the normal looking "D" mint mark. Not all of them do, however. There were 3 sets of dies used to make pennies in 1922 that were so worn out, they should not have been used.

Die pair #1 and #3 produced "D" mint marks that were weak and difficult to see. Die pair #2 was so worn out that it produced pennies with no trace of a "D" mint mark at all, even when magnified. Pennies produced with die set #2 have a strong strike on their reverse with no mushiness. They are the most rare and valuable of the 1922 pennies.

Experts believe there are likely only a few thousand of the 1922 Plain (also referred to as "No D") wheat pennies. There are a lot of fake 1922 No D wheat pennies, though, where the D has been removed.

If you believe you have a 1922 Plain Wheat penny, be sure to have it examined by an expert for authentication.

The 1931-S penny had an unusually low mintage of 866,000 pennies. Most of the 1931-s pennies were less struck in appearance when compared to pennies from other years, but the 1931-s cent was a hot item.

A gentleman named Maurice Scharlack obtained 200,000 of the 1931-S pennies through banking channels for his personal collection. This was nearly one quarter of the entire mintage. He paid face value for the pennies, but $2000 was a large amount at the time, especially during the Great Depression. Because of his horde, you would expect there to be many 1931-S pennies in high grade condition. Unfortunately, many of the coins were stored in less than ideal conditions such as canvas bags and paper rolls. As a result, many of them appeared mottled and were dipped in a chemical solution to try to remove the unattractive tone. This chemical treatment had a detrimental effect on the overall grade of the pennies, so gem condition 1931-S pennies are really scarce.

The 1931-S wheat penny is counterfeited from time to time, so be aware. Usually it is faked by altering the last digit of the date on a 1936-S or 1937-S coin to make it look like a 1. Another way it is sometimes faked is to remove the "S" mint mark from another year of penny and then attaching it just below the date of a 1931 Philadelphia penny that has no mint mark.

If you think you have a 1931-S key date wheat penny, you should have it examined for authenticity by an expert to have it certified as authentic.

If you have a silver colored penny, it is not really made of silver, but rather from steel. You may have heard them referred to as silver pennies, but that comes from their color rather than from the metal they were made from. The 1943 steel pennies are the only regular-issue United States coin made that can be picked up with a magnet and the only coin made that doesn't contain any copper. There's a good reason for that.

In 1943, the copper used to make the wheat penny was needed for the Allied war effort to help manufacture ammunition and other military equipment during World War II. So, in the year 1943, pennies were made from steel rather than from copper. These are often referred to as 1943 steel pennies, wartime steel cents, the 1943 United States penny, the 1943 silver wheatback penny, the 1943 steel wheat penny, or "silver" (referring to their color) pennies, just to name a few.

The wartime 1943 steel pennies were officially released only in 1943 because they discovered steel didn't work out very well. The steel pennies were often confused for dimes, they were rejected by magnets in vending machines that were designed to reject steel slugs, and because the galvanization process didn't coat the edges of the steel penny, body oil and sweat would quickly rust the coin. Because of these issues with the 1943 steel pennies, they resorted back to using copper in 1944 by figuring out how to extract copper from spent brass shell casings from the war.

Many people think the 1943 steel penny is rare, but they aren't, really. All three mints made the steel penny in 1943. Philadelphia produced 684,628,670 of them, Denver produced 217,660,000 of them, and San Francisco made 191,550,000 of them. They aren't often found in circulation any longer, but it is likely there are many rolls of them around. The occasional steel cent can many times still be found in the reject area of coin counting machines. Condition can be an issue with the 1943 steel penny, as their composition made them rust easily.

The standard 1943 steel pennies are worth 12-20 cents or so for circulated coins and 50 cents to a few dollars for uncirculated coins, depending on condition.

The next series of valuable wheat penny variations are often referred to as error coins. Wheat penny error coins are wheat pennies that appear different than what was originally intended by the U.S. Mint, due to minting errors - not due to tampering or defacing.

Billions of coins are produced by the U.S. mint each year. When you include both human and mechanical factors, it's no surprise that mistakes happen. Coins are produced at such a high rate of speed that if the mistakes are not caught immediately, the error coins end up in the hopper, along with a bunch of other coins, to be circulated. Even with quality control measures in place, some error coins are bound to make it into circulation, and they do.

Wheat penny error coins are highly collectible and they fetch a premium due to their uniqueness and scarcity. Error coin collecting has become so popular, there are now both collectors and dealers who deal exclusively in error coins.

The 1955 double die error wheat penny is a minting error that occurred at the Philadelphia mint in 1955. The wheat pennies that were struck with one particular misaligned die were given a doubled image. All of the wheat pennies that were struck with this particular die have a noticeable partial overlapping of the date and inscriptions, while there is very little visible doubling of the Lincoln image.

Over 40,000 1955 double die error wheat pennies were minted before the doubling problem was discovered. Approximately 24,000 of them were released into circulation and the remainder were destroyed.

While there have been other coins that have had the same sort of doubling error as the 1955 DD, none has been as prominent or as noteworthy. The 1955 double die error wheat penny is the king of the double die error coins. It has also been said that the 1955 doubled die wheat pennies brought error coin collecting to the forefront as a serious hobby.

If you think you have an authentic 1955 double die error wheat penny, your best bet is to take it to an expert to have it examined and certified as authentic.

The BIE Error wheat pennies get their name from a break in the die between the letters B and E in LIBERTY which leaves an extra, unintended raised line between the B and E, making it appear to say LIBIERTY, instead of LIBERTY.

The thin area between the B and E in LIBERTY seems to be a very common area for the die to break.

Unless your BIE error coin is in excellent condition, the premium for this error variety is relatively low, generally bringing between $1.00 - $20.00 on average.

Lastly the 1958 Double die error is extremely rare with only three known specimens to be in existence.